TEST MY PROTOTYPE
DEFINE
INSPIRATION FOR MOODY NOTE
A few years ago when I heard a friend was getting married, I wanted to craft a meaningful gift for her and her soon to be husband. My idea was to create a communication box for the bride and groom to hash out difficult conversations with each other. The couple would be able to write notes and messages to each other -loving or adverse-place it in the box.
I never made the box but I thought tackling the challenges of communicating on a global scale with a  technological solution would be interesting to explore

HOW OFTEN ARE PEOPLE TEXTING
We are always on our phones. I found data that backed up my theory that most people with a smart phone are excessively texts. Here is what I discovered:

HOW DOES TEXTING CHANGE THE WAY WE COMMUNICATE?
When we want to communicate with people that aren’t near us, we grab our phones to get in touch with them.  More often than not, we send them a text message over calling, or emailing them. With this, I took a look at the pros and cons of sending and receiving text.
“The written word alone, especially when expressed in abbreviation, cannot possibly convey the subtle nuances that accompany more fragile intimate messages. Machines cannot translate those emotions for you. They can only repeat exactly what they are programmed to do.”-Randi Gunther Ph.D. 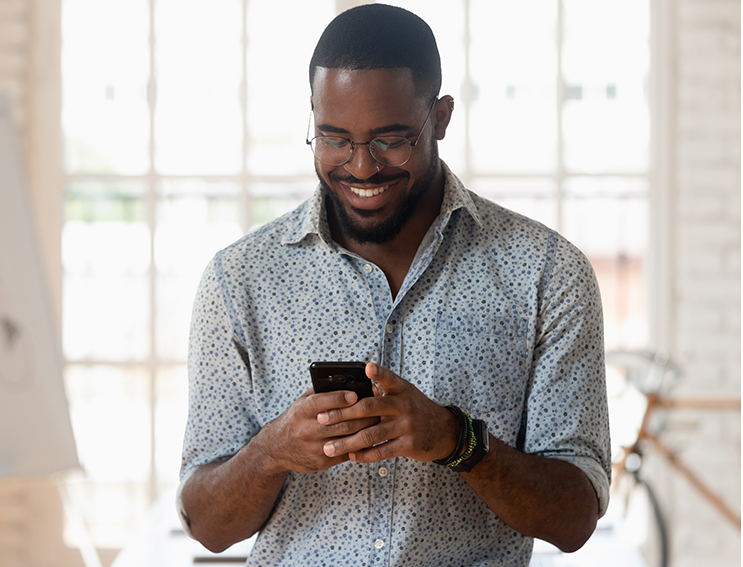 What are the benefits of texting?
You can answer in your own time. No need for immediate response.
Texting is private, no one to overhear what you are saying.
Text are trackable, you can keep a record.
Texters can avoid tone, for the good or bad.
Why Do People Rather Text Than Talk?, Paldesk.com
What do we lose when we text?
Text messaging can lead us to be less empathetic to one another.
Texting can lead to miss understanding, and a lack of ability to identify with each other’s emotions.
We are more likely to have surface conversations through texting and rarely send or receive deeper or meaningful text. We tend to have more details to offer and have a better emotional connection in person.
How Texting Changes Communication, Zawn Villines, July 26, 012
RESEARCH
WHAT TOOLS ARE WE USING?
In order to understand what text apps offered for texting I took a look at popular applications. In addition to the text tools, I took a look at emotional and mental support apps to understand how their communication systems abstracted deeper thoughts and feelings from it user.
Text message is defined as electronic communication sent and received by mobile phone. By this definition there are several text messaging apps, and apps with text messaging features. While these texting apps help people to connect through technology, none of the apps address the issue of conflict resolution, however they all follow the standard form of texting app design. Main features include: texting, making video calls, sharing your location, photos, and documents.

Contrast to text messaging apps that are primarily for exchanging communications, self reflecting emotional apps help one to center themselves and be more aware of their own emotional state but it doesn’t share these with those around them. I found the apps generally presented users with questionnaires that gauged their well being before offering helpful tips and solutions.

USER SURVEY SCREEN - INTERVIEWS
The next step to validating the challenges of communicating via text was to talk to users who text often. I put out a screener survey to recruit 5 participants to interview.

AFFINITY MAP, EMPATHY MAPS & PERSONAS
After downloading the interviews I created an affinity map that helped me to create empathy maps and generate two personas that I would be designing for.

PERSONAS
To nail down who I was designing this product for, I created 2 personas. While the personas are depicted as two people, they represent the theses of interview responses, affinity map and empathy map results.

Confrontational Cathy - Cathy manages a team of field IT Techs and balances work, life, and play well with a small circle of friends and family. Cathy appreciates the convenience of reaching out or responding to her friends and colleagues through text. She just wishes she could move a little faster with concise and impactful communication without being misunderstood.
Nonreactive Roxy - Roxy is a social butterfly with a tongue-and-cheek sense of humor. She enjoys staying connected to her friends, family and colleagues. Roxy is not a fan of having difficult communications with anyone through texting. She thinks that it’s no truth to it, and resolutions won’t be reached. She prefers to only have inspiring and positive interactions.
IDEATION
In combination with Minimum Viable Product (MVP) which is to solve communication problems through texting and How Might We statements,  I created  User stories. User stories identify the functions of the product based on the user needs.

HOW MIGHT WE…
How might we reduce the risk of miscommunication  through text?
How might we help users text with clarity on outgoing messages, and request clarity on incoming messages?
How might we decrease conflict caused by text messages?
The main section of the initial layout through wireframes for the app was designed for Cathy to solve conflict through text. It's a texting wizard that asks a series of questions to prompt Cathy to clearly communicate her qualms with the text recipient.
Meanwhile there’s an exit point or alternative for Non-Reactive Roxy to opt out of confrontation.

My initial design ideas were generated through a set of rough sketches using HMW questions and user flows. Later these rough sketches were tested Guerrilla style at  my local coffee shop.

GUERRILLA TESTING
After sketching out the ideas and testing them guerrilla style - walking up to random test users and having a conversation with them about making the app better for prototyping I found the participants struggling with a couple of challenges
I had to explain the app before, during and after the mini sessions with the users. I think the sketches didn’t have enough details to help users understand without explanation.
There were at least three users who consistently showed confusion as to where they were in the app. Users could not easily distinguish the wizard process from the rest of the app.
One user suggested that there is a confirmation before sharing for insight and after clicking the send button so that the user can make sure the right recipient is receiving the message or draft.
The wizard navigation did not appear on each of the pages. This added to the confusion a little bit. One user explained that she wanted to be able to save at any point not just the input pages.

From here, I created wireframes  and wire flows completed my process of low fidelity mockups.

Before creating a high fidelity mockup prototype I made a style guide and named the app. I made the color and font choice to stay neutral-as in neutral emotions.  But I color coded the emoji icons - which were used to denote how someone is feeling- according to emotional colors.
Going back to the research interviews-emojis are what most of the users said they used to convey emotions. “I use emojis almost every time I send a text” - this is something that Cathy would do to help her with her communications
So red for angry-yellow for happy and blue for calm or apologetic are excellent color codes of representation of the users feelings.

INTERFACE GUIDELINES FOR IOS (APPLE)
Button Styles in iOS
The button styles I opted to use are flat and all uppercase. I followed the standards of design here as well. I will leave the buttons as they are, but will simplify the design styles on my style sheet.
Spacing, and Alignment and Organization
The text, progress guide and navigation are all spaced correctly and aligned just right for easy interaction for the user.
Contrast
The color range for the brand look is limited and the contrast between app sections is well defined.
iOS Tab Bar
MoodyNote’s tab bar at the bottom of iOS screen has only 4 destinations to quickly switch between main sections of the app. I will not change the current layout as this navigation design is used in iOS human interface guidelines.

USABILITY TESTING
The purpose of this usability test is to test the minimum viable product of MoodyNote. Testing involves  studying to see if users are comfortable with and understand how to use the app. The test will uncover if users fully comprehend the wizards steps, phases and completion. Lastly, the overall goal is to test the flow of the app from a users perspective. I hope to discover success and challenges that the users had while performing tasks in the prototype.
I successfully recruited 9 participants, to complete a scenario based  walk through of MoodyNote. The scenario was based on a conflict between a mom and her daughter. Mom was upset that her daughter did not contact mom when she got home, leaving the mom worried.

INSIGHTS
Participants used MoodyNote via the perspective of the daughter.  There were two main focuses of the app. The first way was the texting wizard that asks a series of questions to prompt confrontational users (Confrontational Cathy) to clearly communicate her qualms with the text recipient. The second focus was exit point or alternative for non reactive users (Non reactive Roxy) to opt out of confrontation.
"I like that [MoodyNote]  offers a solution, as opposed to just saying 'I'm sorry' because sometimes that just doesn't cut it."
One main complaint of a few of the participants was that the texting wizard was too long. Out of the consistent complaints, or misunderstandings that participants had, the only revision I second guessed changing was updating the length of the texting wizard. The length of the wizard app is best for the initial on boarding process. Users who consistently text via MoodyNote would experience an expedited process should the app be developed.
Furthermore, the prototype examples can have an impact on users' evaluation of the app. For instance, at least three participants made negative comments about their personal relationship with their moms, signaling that the relevance of the scenario is weakened based on their feelings.  Perhaps their skepticism of the dialogue and its outcome impacted their thoughts of the length of the process. It would be interesting to see if participants felt the same way if the scenario had been different.
Below are updates and changes that more than one participant brought up during both testing sessions testing.
ROUND 1 NOTES

MOVING FORWARD
MoodyNote was well received by participants. They mostly understood the concept and appreciated the benefits. With a few minor adjustments to the call to actions and other language updates, MoodyNote could be helpful for users to communicate better via texting.
If I were to move forward in creating this app, I’d opt for an integration to iOS and android texting apps. MoodyNote could be activated by users and they would create a text message or respond to once via the texting wizard portion of the app.
WHAT I LEARNED
It’s been an intense 7 months working on this app. I’ve appreciated the skills I acquired learning UX and UI.  Wearing the hat for every roll, UX Researcher, Information architect and User experience designer has helped me to be confident and elevate my graphic design skills to a product design strategist.  Here are a few things I look forward to building on:
Working with Material Design (Google) guidelines to be versatile in UI design
Diversify my testers for well rounded insights on usability testing.
TEST MY PROTOTYPE
↑Back to Top